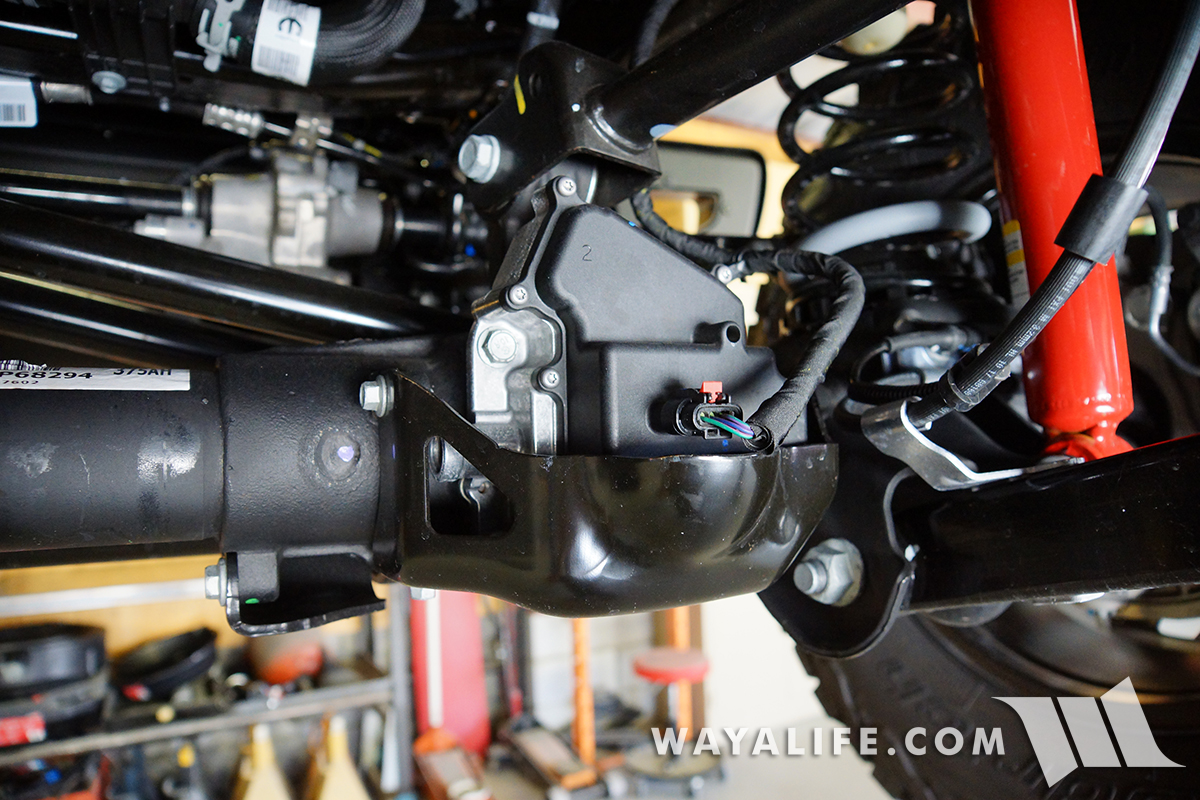 So I have seen people ask about Front Axle Disconnect (FAD from here forward), how does it work, what is it for, what does it mean for axle swaps, and how does it relate to my transfer case.

This will probably be long winded, it it easy to explain in person but typing it it much harder. Well I’ll try…

What the FAD does at a high level is prevent the front driveline ring and pinion and driveshaft from spinning while in 2wd to improve fuel economy. It also reduces wear on many of the associated bearings since those parts aren’t spinning all the time.

The way it works is as such. The passenger inner axle shaft is a two piece shaft with a collar that links the inner and outer portions of the shaft. When it is closed the shafts are interlocked and it works the same way as your JK would have. The entire front driveline is spinning even in 2wd as there are no hubs so the tires turn the shafts which then turns the driveshaft and it freewheels inside the transfer case.

2) Why does this have anything to do with my tcase?

So think about what I just explained. At the FAD interlock the shafts are spinning the same speed In opposite directions and the front driveshaft is not spinning. Now imagine you are cruising down the road and you want to put it in 4wd. Inside your tcase the rear portion is spinning at whatever speed you are traveling and the front is stationary. If you pulling the lever simply pulled the lock collar you’d hear a loud bang as your tcase exploded from what just happened.

This is what actually happens. The front driveshaft output has a synchro and an interlock on it. So as you pull the tcase shift lever the synchro engages the front shaft and spins it up to the same speed as the rear. Once they reach the same speed the interlock allows it to go pull in and engage the front output. This is why the tcase lever is harder to pull because you are spinning up the front shaft. The faster you are traveling the harder it is. Once the front output is spun up and engaged, by pure physics it is now spinning the front ring and pinion and all the shafts are spinning in same direction. After this then the FAD slides the collar and locks the shafts together. All this sounds like a lot but happens in a sec.

3) Hey thanks for the info but what the hell does this mean when I remove FAD by either going to a one piece shaft or aftermarket axles?

Ok so this is where I hope you were paying attention and understanding above. All those things that were added due to FAD create an issue when you don’t have a FAD. First let’s flash back to our ancient jeeps, you know the JKs. Lol. So think about when you are in 4 low and you lift on and off the throttle and you hear a clicking type sounds and rocking from your tcase because there is some slack in the driveline. I hope you know what I mean. There is basically a little slop (we are talking thousandths of an inch here), so that when you need to engage 4wd the teeth can slide together. Now do the same in a JL. You don’t feel it. This is because the teeth have very tight tolerance, you don’t need any “slop” when you have a synchro. This lack of slop is what can cause issues when you remove FAD. With it gone and without hubs again the front driveline is always spinning. Inevitably due to turning etc, the teeth in the front tcase output will be slightly off from being able to engage within the tcase. Well the synchro isn’t strong enough to twist the whole front driveline with everything connected if it is off too far. Since it isn’t able to do that you cannot get past the interlock to engage the front.

So the solution is yank out the synchro and interlock assembly. Dynatrac has an excellent write up how to do this.

That will allow you to basically pull the teeth against each other so that they will engage. It will wear in over time.

4) Is this really required on every tcase?

Well that’s the hard part. It will vary greatly on how much play there is in your tcase. If you’ve used it for years it will break in and have more play and you may not need to do this. It also varies greatly just due to manufacturing tolerances. Again remember this slop/play is in thousands, not huge numbers.

The other workaround is if you do have hubs, you can leave them unlocked, engage 4wd, then lock them in. This I’ll work and several folks in Moab did this as they hadn’t had time to learn and / or modify their tcase prior. I personally think the is the ghetto way unless it’s a temporary solution for you until you get time to fix it right.

If you remove the FAD, you need to fool the computers still. MOPAR will have a ya at dealers to shut off FAD and I think a few of the programmers may too. The other way is to leave the FAD motor plugged in and attached to frame rail (yes I’ve seen this done a few times) or wire a relay into the FAD output to trick it. This isn’t too hard to do either.

Hopefully this all makes sense, if not feel free to ask if something doesn’t make sense…